The Michigan Beekeepers Association was founded in 1865 and continues to this day, making it one of the oldest and most prestigious associations of beekeepers in the country. Since then, beekeeping has been a booming business in the state, especially in recent years.

When Did Michigan Begin Producing Honey?

Unlike many other states, Michigan does not require all beekeepers to be officially licenced or registered to keep bees. Registration is only required if beekeepers wish to commercially package, distribute, and sell the honey that their bees produce.

That does not mean that there are no regulations regarding the best management of bees in the state. Rather, Michigan’s state government has implemented a number of laws regarding the treatment and handling of bees in the state. These stipulations concern the proper transportation, maintenance, and health treatment of bees began to gradually increase in popularity through the mid-nineteenth century, when modern beekeeping practices were developed.

How Much Honey Is Made in Michigan?

In managed populations, honey bees pollinate to produce honey for commercial purposes of selling or packaging under the direction of beekeepers. On their own, however, bees have their own reasons to pollinate. Brood development relies on sufficient and reliable amounts of pollen, and pollen likewise provides protein to the rest of the hive.

Any nectar that bees gather is converted into honey, which is a major food source for mature bees. Leftover honey is stored in combs, which bees depend on for survival during unproductive or unsafe months when they cannot forage and find food for themselves out in the wild.

Michigan is a notable producer of honey nationwide. A report from the US Department of Agriculture found that Michigan had produced more than four million pounds of honey in 2018. This yield came from 97,000 honey-producing colonies, which had an average yield of 44 pounds of honey each. This production had a total value of more than 10 million dollars.

What Are the Main Types of Honey Produced in Michigan?

The honey produced in Michigan is extremely diverse and comes from a large number of floral sources. Many honey farms and apiaries make honey from native star thistle nectar. Plants like alfalfa, goldenrod, basswood, meadow and even pine tree are all popular sources of honey.

Beekeepers also get some sources from out-of-state and produce a variety of specialty honey such as the ever-popular Florida orange blossom honey, Alabama acacia, or even New Zealand manuka honey. Some beekeepers also opt to instead incorporate a variety of different flowers and plant life in their honey production, leading to many selling Michigan wildflower honey.

Is Michigan Honey Produced Seasonally, or Is It Made All Year Round?

Because of the low temperatures, bees are unable to produce honey or be very active at all during winter months. This means that they are only able to produce honey during the warmer times of the year. Michigan honey flow typically begins in late May or early June, and if weather conditions remain warm and favourable, they may continue until August or even September.

Other notable bee subspecies include the German bee and the Carniolan bee.

What Plants and Bees Are Native to Michigan?

Michigan is home to nearly 500 different species of bees, including familiar species like the bumblebee (in the genus Bombus) and the sweat bee (in family XYZ).

The honey bee might be the most familiar out of all of these, but they are not actually native to the state. Instead, they were first introduced to the Americas in the sixteenth and seventeenth centuries when Europeans began colonising the continent.

Nonetheless, Michigan has a vibrant population of plant life that can support pollinators such as honey bees as well as native species. Some representatives of this include:

Are There Any Major Honey Farms or Apiaries in Michigan?

What Sort of Environment Is Needed to Produce Michigan Honey?

Honey bees thrive most in warm, temperate environments. This means that Michigan winters are not especially favourable to many honey bee activities. Michigan is known to have heavy winters whose temperatures can dip down into below-freezing temperatures.

Honey bees will spend these times densely huddled together to stay warm. Bees will be unable to forage food for themselves during this time as they will focus most prominently on staying warm, so beekeepers should monitor their colonies and ensure that they have sufficient amounts of honey to survive on.

If not, supplementary foods like candy sugar should be administered. Entrances and exits to colonies should also remain open to allow for reliable ventilation. Snow can build up around hives during winter, so keepers should keep track of that as well.

As the weather gets better, bees will get more active, such that they have the potential to swarm in the late spring and summer. Swarming is a natural phenomenon in which large numbers of your bees leave the hive, but it should be avoided when possible so beekeepers can preserve their productive bee populations as well as prevent annoying any neighbours with massive, sometimes stinging hordes of bees.

Michigan is known for its lush forests and thriving animal life, which might be a good thing on its own, but it can pose some issues to local honey bees. There are thousands of black bears roaming the state, and if they find an apiary, they can destroy colonies, eat honey, and kill thousands upon thousands of bees.

To keep their apiaries safe, Michigan beekeepers should invest in anti-bear electric fences around their colonies or apiaries; that way, they can deter destructive black bears.

Beekeepers should also be aware of mites. Varroa mites can appear in Michigan bee colonies around the beginning of spring and can sometimes remain until early fall. These mites are massive pests, with the potential to completely destroy bee colonies in a matter of weeks if left unchecked.

For that reason, beekeepers should keep a close eye on the mite populations in their colonies. If the mite frequency exceeds a given threshold, action should immediately be taken. Either apply pesticides or utilise an effective natural treatment such as essential oils. 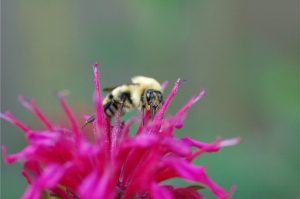 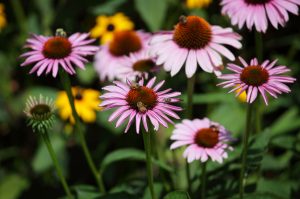 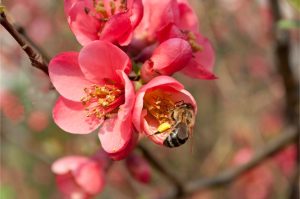