Bumblebees are gentle creatures that humans have befriended. Petting a bumblebee is not a common experience and attempts to pet one should be around somebody well-versed in bee behaviour.

Some bumblebees may allow people to lightly pet them. Their hairy bodies make them soft to touch.

There are instances of bumblebees befriending humans. They can even recognize faces if they’re exposed to them repeatedly.

In Scotland, a woman who rescued a wingless queen bumblebee while gardening had subsequently made it her pet. The bee was unable to go back to a nest, which would have been rejected for its inability to contribute to the colony.

The bumblebee found comfort living and interacting with the woman who saved it. Ultimately, she was able to keep her wingless queen bumblebee pet alive for five months.

It’s safe to assume that a still bumblebee would not mind being pet. However, you will be able to tell if a bee is threatened by you and prepares to fly away or sting you. They may sometimes be lying on their backs as a defence mechanism.

How Social Are Bumblebees?

Bumblebees are social insects that live in colonies. They rely on their caste system to keep reproducing and creating honey. Bumblebees and honeybees create eusocial groups amongst themselves. This means that they have formed a system that gives different individuals certain jobs.

Are Bumblebees Scared Of Humans?

Sometimes, bumblebees will sting if a human is close to their nests or food source. This is their defensive reaction to protect their colonies.

However, bumblebees are accustomed to humans and are not afraid of them. In fact, they may be attracted to floral scents humans wear or even sweat. They are also drawn to green, purple, and blue colours which may be why they approach people wearing these shades.

Bumblebees will approach humans if there is something attractive about them, such as a scent or food. Humans can also attract bees with the colour or pattern on their clothing. Bees like sugary foods and sweet smells. Sugar water can also cause bumblebees to approach people.

Can You Stroke a Bumblebee?

A bumblebee might allow a person to stroke it. However, handlers have to be careful when interacting with a bumblebee. Their fragile wings can become damaged from failed or careless petting attempts.

Stroking a bumblebee can accidentally result in rough handling. Sudden movements will alarm bees and may lead them to sting.

When Is the Best Time to Stroke a Bumblebee?

You can pet a bumblebee while it is collecting nectar. Some pet bumblebees by offering them sugar water from their hands.

What Does It Mean When a Bumblebee Lies on Its Back?

A bumblebee lying on its back means it is feeling threatened. They also may be on their back when they’re tired. It’s best not to approach a bee on its back as it might try to sting. You can possibly offer a bit of sugar water nearby in case the bee needs to fill up on energy.

How Do You Pet a Bumblebee?

You can pet a bumblebee by attracting it and letting it feed on the palm of your hand. It’s safe to gently use a finger to stroke the bee. However, a bee’s sudden movement may cause you to accidentally touch its bottom or stinger.

It’s easier to attempt petting male bumblebees rather than female ones. Male bees do not have stingers. They also tend to be more docile than females. However, they will exhibit defensive behaviours such as lying on their backs if they feel disturbed by you.

When Do Bumblebees Sting?

Bumblebees sting in defence. Only female bees have stingers, so not every bumblebee that approaches you can sting. Bumblebees that feel threatened or are handled roughly will sting.

Bumblebees are also capable of stinging multiple times, unlike honeybees.

Where Can You Find Bumblebees?

Bumblebees are out flying during the spring and summer. Their nests can be near fields, forests, and other places near flowers. Bumblebee nests are underground.

Old mouse or rodents’ nests are usually the sites of bumblebee nests. They reside throughout North America. It may be difficult to find them during cold seasons, although bumblebees are more likely to be out in the winter than honeybees.

How Do You Attract Bumblebees?

You can attract a bumblebee with food sources. Bees are likely to approach you if you offer sugar water or honey. You can also keep plain or sugar water in plain dishes near flowers.

If you want to attract bumblebees to your yard, you can plant flowers that they love. Bumblebees enjoy visiting purple flowers such as honeysuckle, lavender, and aubretia.

You can even go as far as buying or building bumblebee houses. These structures stand at about a few feet tall and have multiple holes that provide shelter for bumblebees.

When attracting bumblebees, make sure to avoid using pesticides.

Honey bees may be more difficult to pet than bumblebees. Honey bees are more flighty and skittish. They are also smaller than bumblebees, so the chances of hurting the honey bee while petting it are higher,

Honey bees are social creatures like bumblebees and can become accustomed to humans as well. Rather than stroking a honeybee, it would be safer for you and the bee if you hold it in your palm instead. You may find a bee resting on a flower which would make it easy to pick them up. 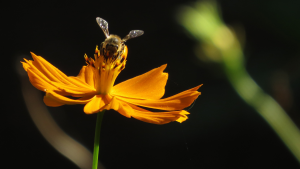